Is a Bulldog a Mastiff?
What Are Their Differences?

So is a Bulldog a Mastiff?

Some dog breeds have significant similarities, leading people to wonder if they can be considered variations of the same breed. To this end, people might wonder whether a Bulldog is a Mastiff...so are they?

Yes and no. In the casual sense, the terms “Mastiff” and “Molosser” have become somewhat interchangeable. A Bulldog is classified as a molosser, so many people consider a Bulldog a Mastiff.  But they are two separate breeds.

If you are wondering why all the confusion, even the dog world is not in agreement.  For example, the AKC (American Kennel Club) doesn’t even consider molossers a separate breed.  So don’t be too hard on yourself if you’re a little confused. 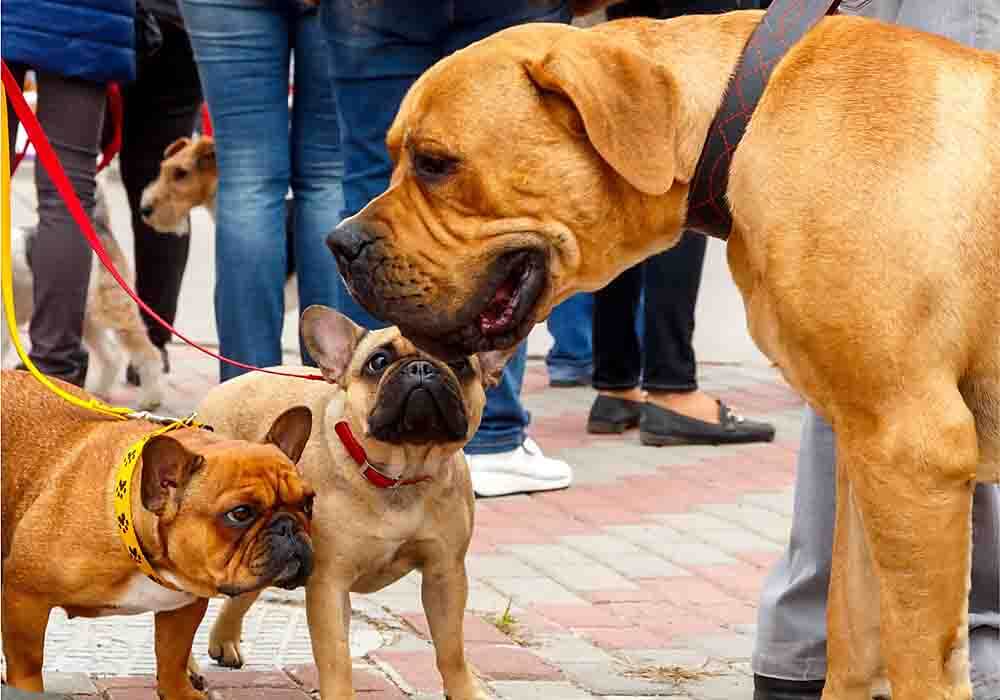 How Can a Bulldog Be Considered a Mastiff?

Technically, a Bulldog and a Mastiff are not one and the same. They are somewhat closely related, both being molossers. Molossers are a category of large and solidly built dog breeds that all come from the same ancestor.

Molossers also have specific characteristics that set them apart in terms of appearance. Generally, they have dense bones, short muzzles, pendant ears, and relatively short and well-muscled necks. They can also be categorized in two groups—flock guardians, which are the light-colored breeds, and home guardians, or the darker-colored dogs.

When people refer to the Mastiff, they are generally talking about the English Mastiff. This is a large molosser dog that is very well known for its size and strength. In everyday conversation, terms such as "the Mastiff" and "the Mastiff group" have become synonymous with the term "molosser."

There are many breeds that fall under this umbrella.  As a matter of fact, almost too many to count.  If you want to see a complete list, check out this website.  Because Bulldogs are molossers, they can also be considered Mastiffs in the colloquial sense.

However, using the term "Mastiff" properly, Bulldogs are not Mastiffs. The only dog breeds that can truly be considered Mastiffs are the ones that have the word "Mastiff" in their name. Click here to see photos of different Mastiff breeds.


How Are Bulldogs Related to Molossers?

The term "molosser" comes from Molossia, which is an area of Epirus, which was an ancient Greek state. There, the large shepherd dog was commonly known as a Molossus.  The Bulldog, on the other hand, is actually a descendant of the Asiatic Mastiff.

Bulldogs and Mastiffs were both used in bull-baiting in England. These dogs share certain personality traits that made them good fighting dogs and guard dogs.

The Bulldog breeds, including the English Bulldog and American Bulldog, split from the molossers in Europe.  When the New World was colonized, Bulldogs came along with the colonial people. Even though Bulldogs are quite a bit smaller than most molosser breeds, they are still considered to be molossers.

How Are Bulldogs and Mastiffs Similar?

These dogs have many similarities in terms of personality. They were used to fight and guard because of their strong guarding instincts. If you have a Bulldog or Mastiff, you will probably notice his strong guarding instincts as he protects your home. Bulldogs and Mastiffs both tend to be great with children as well, and both are excellent family dogs when you have trained them well.

In addition, they have notable physical similarities. Both the Bulldog and the Mastiff have wrinkled faces. They have loose facial skin that fall in folds around their eyes.

How Are Bulldogs and Mastiffs Different?

Bulldogs and Mastiffs may be somewhat closely related. They also may have some appearance traits in common. However, they are also very significantly different.

Probably the most notable difference between Bulldogs and Mastiffs is their size. Mastiffs are much larger than Bulldogs.

Bulldogs also have sturdy builds, just like Mastiffs; however, they are much smaller. Typically, they are about half as tall as Mastiffs while standing on their hind legs, going up to only 12 to 16 inches tall at the shoulder. Male Bulldogs usually weigh between 53 and 55 pounds, while female Bulldogs weigh between 49 and 51 pounds. Bulldogs typically have short legs that keep them low to the ground as well.

As many dog owners know, the size of the dog is often inversely correlated with his lifespan. The Mastiff, which is a giant dog, will often only live to be 6 to 10 years old. The Bulldog has a somewhat longer lifespan at 8 to 12 years.

Mastiffs have large, square heads with muzzles that are about half as long as their skulls. They usually have hazel or dark brown eyes surrounded by black masks. They also have an underbite or scissors bite, but their teeth typically don't show when their mouths are closed.

Bulldogs have broad heads with flat, pug faces. A lot of people will say that they look push-faced because they look like their faces have been pushed back against their skulls; Mastiffs don’t have faces that look like this. Typically, Bulldogs also have pronounced underbites, with their lower teeth showing a lot of the time even when their mouths are closed.

Bulldogs are pretty strong, but Mastiffs are even stronger. If you want to know why, remember the relative sizes of these two dog breeds. It makes sense that Mastiffs would be stronger, given how much bigger they are.

Bulldogs are relatively low in energy, and you don’t have to walk them that much. Mastiffs have significantly more energy, and they require more exercise as well. However, it’s crucial that you train your Mastiff if you are going to be walking him; since he is so big, he might be impossible to control if you have not leash-trained him.

Typically, Bulldogs have more variety in their coloring than Mastiffs do. They can be shades of white, brindle, solid red, fawn, yellow, piebald, fallow, or any combination of these colors.

In contrast, Mastiffs generally have short and flat coats in solid colors. These could be golden fawn, apricot, or light van. They can also have brindle coats, according to the Mastiff breed standard.

Both of these breeds have short coats that are relatively low-maintenance. However, the Bulldog is easier to groom than the Mastiff.

As you can see, Bulldogs and Mastiffs have quite a bit in common. However, they are by no means the same dog. They are very different in terms of both how they look and everything you need to do to take care of them.

Even though a Bulldog can colloquially be considered a Mastiff, it’s pretty evident that this is not technically accurate. They are two separate breeds.

If you're considering getting one of these dogs, you should learn as much as possible about both breeds. This way, you'll be able to make an informed choice when you decide to get either a Bulldog or a Mastiff. Dogs of both of these breeds can make great pets, but it's a matter of learning what's a good fit for you and your home.
Is a Bulldog a Mastiff