Is a Pug a Mastiff?
What Are Their Differences and Similarities?

Pugs are not part of the mastiff family. They’re smaller than mastiffs, and they don’t serve the same purpose. However, pugs make for great companion dogs as that was their purpose when they were first bred. Larger mastiffs can be pets, but they are also better than pugs as guard dogs.

Whether you want to get a pug or a mastiff, understanding a bit of their history can help you learn about your dog. This can be especially important if you want to get multiple mastiff breeds. So get ready because the pug and the mastiff have an intriguing history. Read More Below... 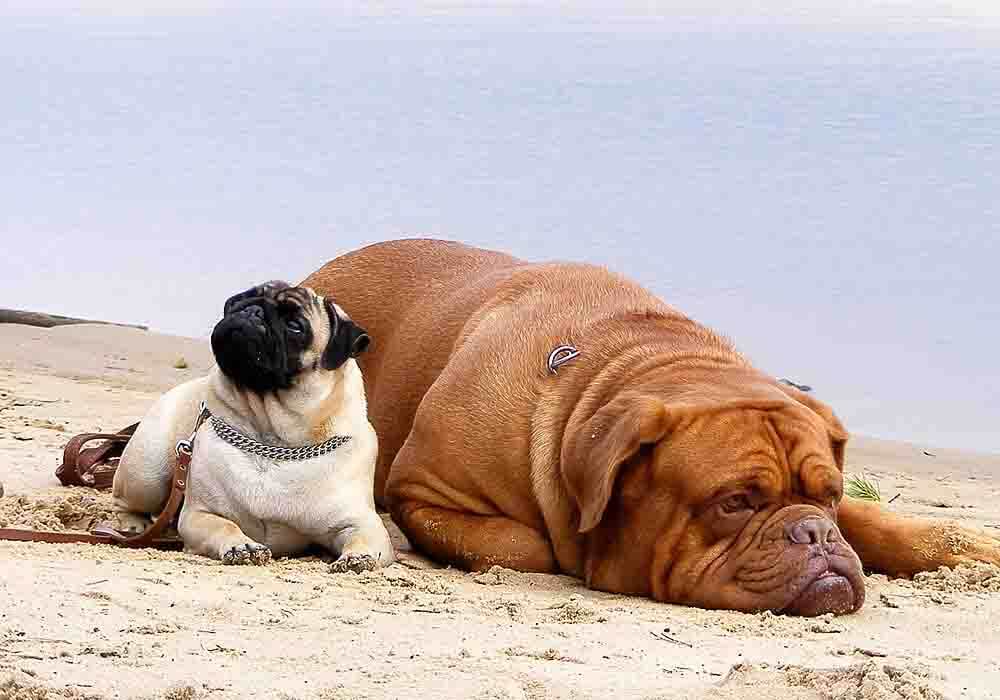 History of the Mastiff

Before we can determine if a pug is a mastiff, we should figure out what a mastiff is. A mastiff is a group of dog breeds, and mastiffs have different backgrounds and places of origin. Mastiff breeds are typically larger dogs with shaggy coats, though not all mastiffs fit both of those descriptors.

These dogs came from the same predecessor called the molossus. The molossus was a Greco-Roman dog that existed in different parts of the world and in different populations. While the molossus no longer exists, the breed developed different variations which led to the mastiffs we know today.

Over time, mastiffs have worked as guard dogs. They have worked with herds on farms, but they protect the other animals rather than corral them. Nowadays, mastiffs can serve as family dogs, and they can guard us and our homes.

Since they’re not a single breed, you can choose from different types of mastiffs based on multiple factors. Mastiffs come in different colors and sizes, so one mastiff breed might be better for specific people than others.

As we mentioned, mastiffs are more than one breed of dog. When considering whether a dog is a mastiff, it’s important to know some of the common types of mastiffs out there. Each common mastiff breed has its own characteristics, which can make categorizing mastiffs more difficult.

● The first type of mastiff is the Mastiff. This breed first developed in ancient Egypt and Rome, and they served as guard dogs and fighting dogs. Mastiffs come in different colorings, such as apricot and brindle. Today, they make great family dogs, and they typically weigh 120 to 230 pounds.

● The Bullmastiff is another member of the mastiff family. Bullmastiffs got their start in England, and they are a combination of bulldogs and the Old English Mastiff. These dogs don’t tend to bark as some other breeds, but they are big, with an average weight of 100 to 130 pounds.

● Next, we have the Neapolitan Mastiff, which got its start as a Roman dog of war. They don’t look as similar to the other types of mastiffs, but they’re just as large and powerful. Common colors include black, blue, and mahogany, and they usually weigh over 150 pounds.

● The Tibetan Mastiff is another common type of mastiff, though they’re unique. These dogs are huge and have very furry coats. However, they’re also very independent and reserved.

These four types of mastiffs are by far the most common. They all fit the bill for being big and protective breeds. All of them also have unique histories, and none developed in the same way as any of the others.

Still, the pug is quite different from these breeds, so it can be interesting to consider the pug’s relationship to mastiffs. The pug may have the same face as some mastiffs, but they don’t make the list for types of mastiffs. If you want to learn more about the types of mastiffs, click here.

While many of the common mastiffs started in Europe or Africa, the Pug has its roots in China. The Pug’s predecessor was known as the Happa, which shares similarities with the Pekingese, and it still exists today. It’s thought that short-mouthed dogs, like the Pug, developed in the seventh century BC.

These short-mouthed dogs have different muzzles, and their coats are shorter than the Pekingese. Early on, the Pug and other dog breeds were treated like royalty, and dogs had their own servants. It was during this time that the Pug was very popular in China.

However, from the 12th century until the 16th century, the Pug wasn’t as popular in China, though the breed did gain some popularity later. The Pug has an interesting history, which you can read more about here.

How Pugs Moved West or How The West Was Pugged

Later on, the pug became more popular in Europe, and people did start to crossbreed the Pug with the Bulldog and other mastiffs. However, the Chinese wanted to keep the Pug breed as pure as possible, so they didn’t crossbreed. As the Pug gained prominence in China, the breed started to gain popularity elsewhere.

First, the Russians started to fall in love with the breed. It’s believed that Catherine the Great had an aunt who kept Pugs. From there, the Pug moved into the rest of Europe, specifically The Netherlands, though it also had a place in other countries.

The Dutch East India Company also helped the Pug migrate to Europe. Since its first appearance there, Dutch princes have owned Pugs. A Pug was thought to save a prince’s life, so they serve as good luck charms, and the dog has become known as the Dutch Mastiff.

Now, the Pug is a popular breed in many countries around the world. They make great family pets, though they’re not great guard dogs like large mastiffs.

The Pug and the mastiff family do share some physical features. Both tend to have shorter faces, and they usually have brown fur with black fur on their snouts. Pugs have the same appearance as mastiffs, except their much smaller, though there are more reasons for the comparison.

However, there are some differences between the dogs. For one, the nickname “Dutch Mastiff” doesn’t accurately describe Pugs. While Pugs are a favorite among Dutch royalty, these dogs didn’t develop in The Netherlands.

Sad to say, these dogs also don’t have any relationship with the mastiff family. Despite some crossbreeding, purebred Pugs are just that--they’re Pugs. However, both dogs make great family pets today, albeit for different reasons.

The Pug makes for a loving companion, and it’s a great breed if you want a smaller dog. Mastiffs, on the other hand, are large and can serve as both family pets and family guard dogs. You can’t go wrong with either type of dog, though it’s important to remember how they are similar or different from each other.

From their short noses to their distinctive coloring, Pugs share a lot of features with the mastiff family. While they may look alike, Pugs actually don’t have any connection to mastiff breeds. Even though it can be fun to think of the Pug as a small mastiff, it's apparent many think they are with their cute and cocky attitudes.