Are Bullmastiffs Good
With Kids Or Babies?

Can They Be Trusted?

Bullmastiffs are good with kids or babies because they are generally gentle and affectionate dogs. They can comfortably play with kids and offer excellent companionship. However, their massive size also means they might inadvertently knock your kids over while playing.

Nonetheless, they’re great dogs for the most part, and for the rest of this article, I’m going to show you in detail why you need a Bullmastiff and how you can get your kids to enjoy having the dog around. 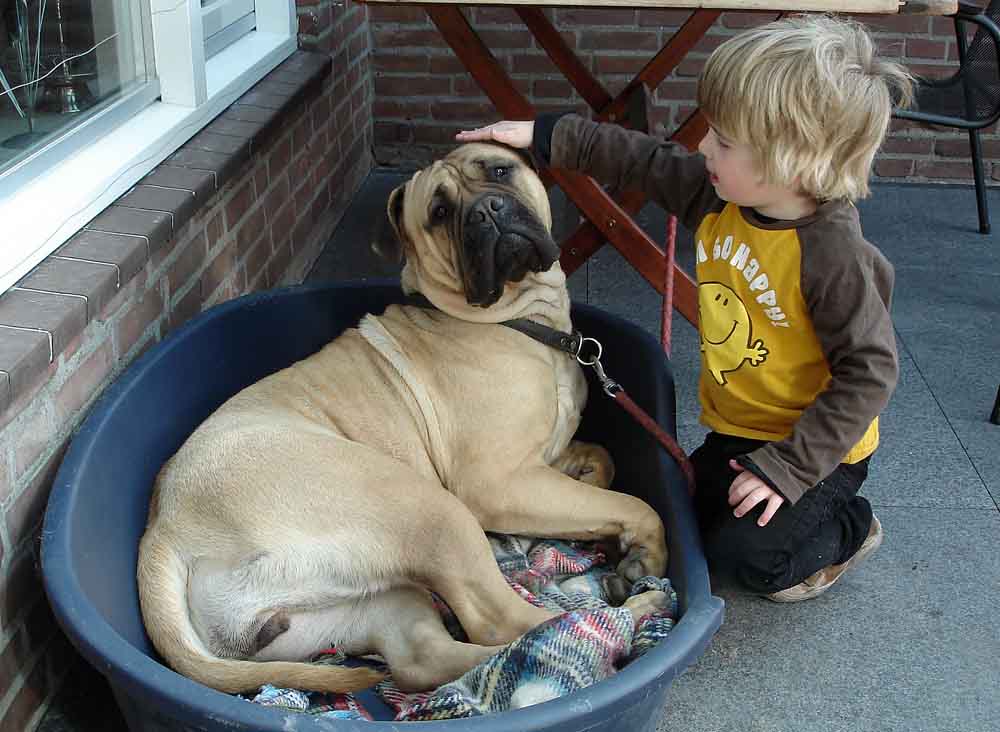 Teach Your Kids and Your Dog To Cohabit

The bullmastiff isn’t a small dog, as shown by the measurements in the table below:

This means that while they are friendly family dogs, their size can be a limiting factor in how well they mix with your kids. To get past this hurdle, it’s essential to train both your kids and the dog as well as possible.

Teach the bullmastiff to refrain from any actions that could endanger the children, such as biting or scratching them with their paws.

This usually isn’t a problem as most bullmastiffs will simply walk away when disturbed but they have been known to be slightly aggressive when put under undue pressure. As a result, parental supervision is key at all times.

Are Bullmastiffs Good With Babies?

Bullmastiffs are great with babies, provided they are properly trained and always supervised. These dogs can be quite affectionate, especially with kids and babies. However, they are also quite excitable, and since they’re so large, they might inadvertently knock over your child.

There are two major situations you should avoid with bullmastiffs:

Is Owning a Bullmastiff Worth It If You Have a Kid?

Pets are great, but owning one may get exhausting, especially for first-timers who weren’t prepared for the grooming work and expenses that come with it.

The problem can become even more serious when a child is involved. Not only do you have to consider the extra care involved in taking care of the dog, but you also have to consider getting a dog that is suitable for a growing child.

Bullmastiffs fit the bill quite well. They are gentle, well-behaved, and relatively easy to care for. This makes them a great choice if you have a child to consider.

Here are some great advantages that make bullmastiffs a good choice when raising kids:

They Are Easy to Live With

Unless provoked, bullmastiffs are typically gentle and unproblematic. They are the kind to sit quietly and savor the moment with you.

You get the best of both worlds with this breed because while they’re gentle when left alone, they can also be excitable when you play with them. Because of this, they are incredibly easy to get along with and a good choice for kids.

Just make sure to get them a quality bed to rest like this Pet Fusion Dog Bed from Amazon, and you’re good to go.

Bullmastiffs are calm dogs. This makes them very good with kids as they’re very tolerant and are not unnecessarily aggressive.

Some well-trained Bullmastiffs are able to bear some degree of discomfort from the child for the sake of play because they are empathetic to the innocence of children.

On the other hand, bullmastiffs can be aggressive depending on how they’re trained — if at all. Untrained or poorly trained mastiffs might display aggressive behavior towards people they’re unfamiliar with.

Bullmastiffs make excellent guard dogs for a reason— they can be quite aggressive when needed. However, this aggression can be avoided by exposing the mastiff to many different faces from a young age, so they grow up accustomed to strangers and socially adept.

Still, it’s something to consider if you want to keep your bullmastiff as a family dog rather than a guard dog.

While they’re naturally friendly to familiar faces, it should still be your priority to ensure they’re trained properly.

Bullmastiffs are much easier to train than most other dogs due to their good temperament and their history as guard dogs. This could make them good playmates for your children if you want a family dog.

You can reward them with treats as well and involve your kids to make learning a fun experience for everyone involved.

Downsides of Owning a Bullmastiff

As good as these dogs are, there are a few things to keep in mind:

Learn all of the Bullmastiffs good and bad points before bringing one home. This article of ours will help you avoid any surprises.

Are Bullmastiffs Good With Kids Or Babies?....
Final Thoughts

Bullmastiffs are a great companion for everyone, especially kids. Their affectionate and gentle personality makes them so great with not only kids but also adults and other pets.

I'd say a bullmastiff is a pretty decent choice of a pet because the perks far outweigh the drawbacks.