What Were Mastiffs Bred For?

Hint: Their Size Made Them Attractive For Their Role

Large, highly intelligent, and good-natured, the Mastiff is many a dog lover’s favorite, and apparently, it has been this way for centuries. Mastiffs have been around since the ancient European and Asian civilizations, even catching the eye of Roman Emperor Caesar himself. But what were Mastiffs bred for?

Mastiffs were first bred in England during the 19th century to guard British estates. They are known for their brave, protective nature, as well as their drooping ears, large head, and wrinkly coat. It is generally agreed that English breeders are responsible for Mastiffs as we know them today.

Most people associate large dog breeds with aggressiveness, but it’s just not the case with the Mastiffs. They are practically gentle giants whose loyalty to humans that gain their respect remains to be one of the biggest reasons why they are still a favorite to this day. Read on to learn more about this incredible breed. 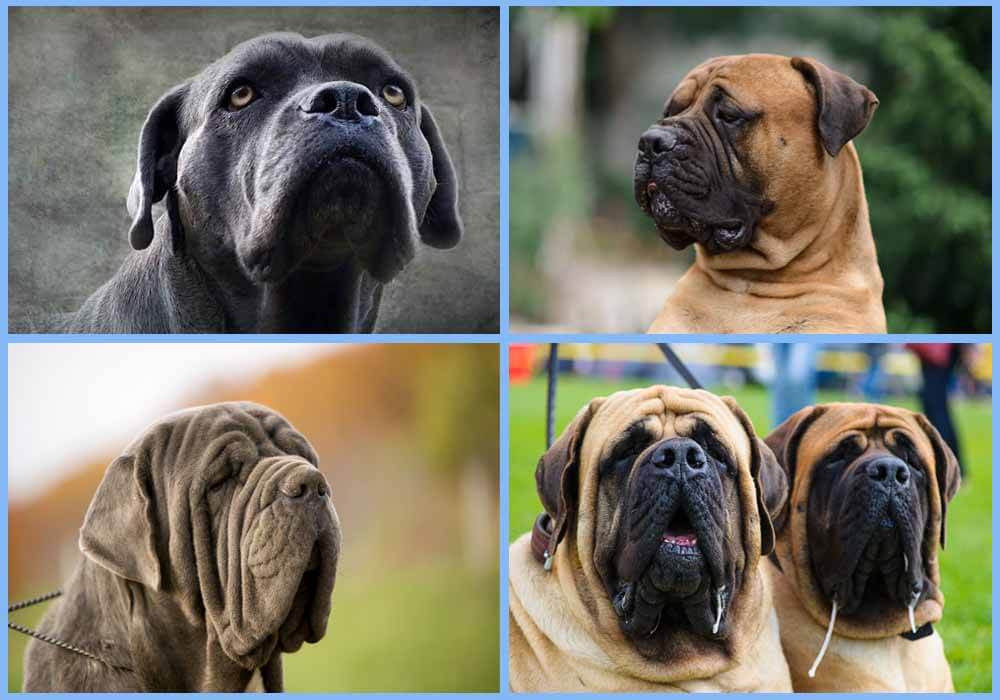 What Were Mastiffs Originally Used For?

The Mastiffs were originally used by the ancient Celts as war dogs because of their fierce protectiveness, massive bodies, and acute hunting skills. It is also believed that when Carthaginian ruler Hannibal crossed the Alps in 218 BC, he brought along 5,000 war Mastiffs as part of his army.

So if you’re wondering what Mastiffs were bred for, their history will tell you a great deal. Ancient Roman Emperor Julius Caesar was also said to have been impressed by the Mastiffs that he encountered during his invasion of Britain.

These giant hounds protected their owners’ estates fiercely, even helping fend off the Roman army of their own accord. Julius Caesar was so impressed that he took some of these large dogs back to Rome.

He continued to use Mastiffs as war dogs, as well as to fight against other large animals in arenas for public entertainment. Mastiffs contended with lions and bears, and even gladiators in these bloody fighting arenas, where they fought to the death. Needless to say, it was unbelievably cruel.

It is also common to see the unmistakable large head and wrinkly coat of Mastiffs in ancient European and Asian art, though the ancient Mastiffs are quite different from the ones that we see today as a result of systemic breeding in England several centuries ago.

Why Was a Mastiff Bred?

Mastiffs were first bred systematically in England in the 19th century in order to use the dogs as guardians against wild animals and encroachers. But just like in Ancient Rome, Mastiffs were also used to fight against other animals for entertainment during the Elizabethan Era.

Mastiffs are known to be dignified and noble animals, not only because of their intimidating appearance, but also because they used to be bred by English nobles. The Mastiffs as we know them today are bred from the Alpine Mastiff and the ancient Alaunt and have been refined for their hunting skills, docility, patience, and bravery.

When the cruel practice of pitting animals against each other for sport was banned in England, Mastiffs continued to be bred by English nobles and used mainly as family dogs and guard dogs.

The oldest Mastiff kennel ever recorded dates back to the 1400s, from a female Mastiff owned by Sir Piers Legh who brought his Mastiff to battle with him. Unfortunately, the knight was killed in the fighting.


Pro-tip: Mastiff anxiety, aggression, destructive chewing, jumping up, fearfulness, and other behaviors can be controlled with the right training program.

Were Mastiffs Used in War?

Mastiffs were used in war in ancient European civilizations. The Celts were known to have defended the British isles from Roman invasion with the help of war Mastiffs. And Julius Caesar, impressed by the fighting dogs, also made Mastiffs part of his fighting force after seeing them in England.

It became so common for dogs to be used in fighting that nobles and warriors often traded fighting dogs for use on the battlefield. For example, Henry VIII was said to have gifted Spain’s Charles V with hundreds of war Mastiffs.

So since the ancient European civilizations, Mastiffs were bred for battle. But the breed was not perfected until English nobles started systemic breeding in the late 1800s.

Despite a history fraught with war and fighting, Mastiffs today can be more aptly described as gentle giants. Mastiffs can grow up to a height of more than 27 inches (68.6 cm) and weigh up to 230 pounds (104 kg). They are great as family dogs, and can even be trusted with kids.

If you’re planning to get one (or already have one at home), here are some Mastiff traits that you need to know about.

Mastiffs Are Fiercely Loyal and Protective

Mastiffs are naturally very protective of their humans. Once you gain their respect, they will keep you safe as long as they live. Dogs have a way of staying alert even when they’re asleep, and that is so true with Mastiffs.

Some centuries back, English nobles would let out their Mastiffs at night to ward off wild animals and strangers. That keen protective nature is still strong in Mastiffs today.

Mastiffs Are Even-Tempered and Docile

Looking at Mastiffs, you wouldn’t think of the word “gentle’. But that’s precisely what they are. Sure, they can fight off strangers and bad people, but they are incredibly gentle and good-natured with those that they trust and love.

Mastiffs can be trusted with young kids, but you still would want to be careful when you have a baby around, especially when you have a Mastiff puppy that’s yet to find out just how strong it is. When they are trained, though, Mastiffs are reliable and hardly become aggressive, unlike smaller breeds like the Chihuahua.

They also don’t need as much exercise as other breeds, such as the Labrador or German Shepherd, making Mastiffs great for those who have a busy schedule.

Still, even the most relaxed dog needs enough exercise. So don’t forget to take your Mastiff out on its daily walk or go playing at the park once in a while,

Like most giant breeds, such as the Great Dane, Mastiffs tend to have shorter life spans. On average, Mastiffs live for about 8 to 10 years and are quite prone to health issues like hip dysplasia, osteosarcoma, and cardiomyopathy.

Note that Mastiffs are an expensive breed too. So deciding to get one definitely is a decision that you don’t make overnight.

Mastiffs Are Intelligent and Trainable

With consistent training, they will be able to do just about any command or trick. However, the key to effective training is gaining a Mastiff’s respect. If they don’t see you as the leader of the pack, they won’t pay attention to your commands.

But given their gentle temperament, it won’t be hard to bond with and establish boundaries with a Mastiff.

What Were Mastiffs Bred For...Final Thoughts

Mastiffs are unique because of their colorful history and attributes. It seems like they have seen human nature at its worst and at its best, as they were bred for war.

However, modern-day Mastiffs remain amazing protectors of thousands of homes all over the world. Although they can be aggressive towards strangers who pose a threat, Mastiffs are fiercely loyal to their humans.

These gentle giants also do not come cheap, but they sure are worth every penny.