English mastiffs are very popular throughout the world. They’re known for their affection, love, and hard-working attitude. As a member of the working group of dogs, they’re used to dealing with heavy loads. However, it means that they require more physical activity from their owners.

So, are English mastiffs good family dogs? Absolutely! They’re great with children and other pets, and they definitely love their fair share of attention. As long as you have plenty of space for them to run and you’re able to play with them often, English mastiffs can be an excellent addition to your family.

Before bringing one home as a new family member here's 10 key questions that we felt you might have which we've answered in depth. Read More Below...

Mastiff ramps are a great way to save your dog's joints and your back. You can find them on Amazon by clicking here now. 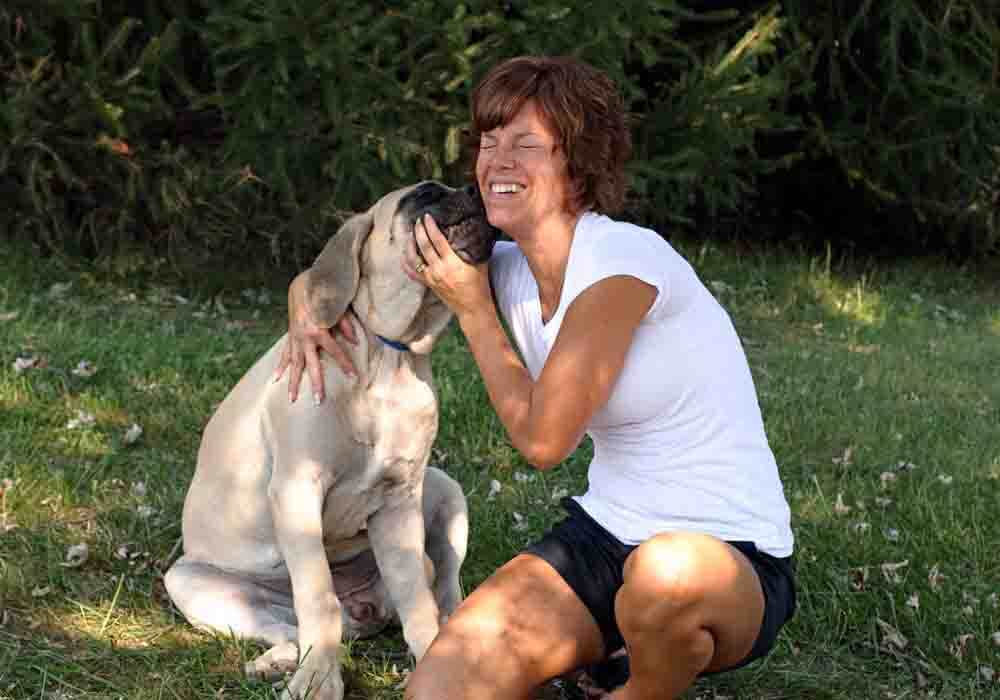 English mastiffs are incredibly friendly to their owners and most other people. They’re known to be gentle giants, which is why so many pet owners love to adopt them. Despite their ferocious appearance, you can show as much love to an English mastiff as you’d like.

The only concern that you might want to think about is that some English mastiffs can be a bit aggressive if they were neglected when they were young. This aggression stems from their desire to bond with their owners, so it’s basically sadness and confusion. They start to get angry, thus the irrational behavior.

As long as you’re able to show love and attention to your English mastiff, you won’t have to worry about anger or shyness (which can also be a problem). Some people believe that these dogs can actually be a little bit too friendly, running after friends and family to tackle them and lick them as much as possible.

All in all, the friendliness of the average English mastiff is unquestionable. They’re ready to play and have a good time with anyone who they see.

These dogs have a high level of social needs. You should always introduce new friends and family to your English mastiff as soon as possible to bridge the gap of concern or confusion that they might have. Once the bond is made, everything will be smooth from then on out!

Are English Mastiffs Good With Babies And Toddlers?

English mastiffs aren’t aggressive towards babies or toddlers, but they’re a bit too big to have them around often. They’re overly playful at times, which leads them to throw their body weight around. If they’re playing with a baby, it can become dangerous.

If you have an English mastiff at home and you also have a toddler or a baby, try these suggestions:

There are plenty of alternative solutions. If you already have an English mastiff, you don’t have to worry about putting them up for adoption. By simply separating or training your dog, you can have them coexist in the same living space as your child. As long as you’re firm and not budging about the aforementioned rules, they’ll understand soon enough.

Are English Mastiffs Good With Other Dogs And Cats?

English mastiffs, much like most other mastiffs, are great with other pets. However, there are a few things to consider:

If you’ve looked through all three questions and everything checks out, then your English mastiff will have no problem getting along with other pets. Make sure you slowly introduce them rather than avoiding introductions and hoping for the best.

Note: English mastiffs are very friendly (as mentioned above), so it could be a bit dangerous if they’re playing with small dogs and cats. Keep an eye on them when they’re playing together so it doesn’t get out of hand.


Mastiffs drool over their monthly Super Chewer box from BarkBox which contains Mastiff proof toys as well as treats they love and beefy chews with FREE delivery…Click here now!

Like all dogs, English mastiffs can be chewers if they’re not corrected. They have incredibly strong jaws, which can cause serious damage to your furniture. When they’re puppies, you always have to keep them from chewing anything around the house. They don’t know their own strength, nor do they know the dangers of what they’re doing.

You can easily get your English mastiff to stop chewing by using anti-chew sprays, providing enough toys for them to chew on, and firmly correcting their bad behavior. Remember that they’re not doing it to spite you, nor are they chewing on your furniture to cause irreparable damage.

Most puppies chew because they’re trying to remove their baby teeth or scratch their gums. Either way, you can keep them away from your furniture with a good game of tug-o’-war, or by playing fetch. Tennis balls work wonders when it comes to removing an English mastiff puppy’s teeth.

As they grow older, English mastiffs are a very intelligent breed. They’re responsive to new commands, and they know what they are and aren’t allowed to do. By setting boundaries when they’re young, you can reap the benefits and gain their respect when they’re adults.

As a final note of caution: Never try to put your hand in or around an English mastiff’s mouth when they’re biting furniture. Their jaws are like vices, and they can accidentally cause severe damage to your hand if they don’t see it.

Want to know what it's like to live with an English Mastiff?
This interesting YouTube video will tell you!

Unfortunately, English mastiffs aren’t the best guard dogs. People often think that they would be since they’re big and scary if you don’t know them well, but they’re not going to attack unless they’re provoked time and time again. Even then, it’s rare to see one of them intentionally act aggressively.

If you’re looking for a guard dog, English mastiffs might not be your first choice. That being said, they’re excellent for alerting you when something’s wrong. For example, if someone were to break into the house or go into your backyard, they’ll bark up a storm until you are aware of the situation.

For most English mastiff owners, the appearance of their dog is enough to keep them safe. Nobody wants to go after someone who has a 200-pound mastiff at their side! They’ll steer clear and cease to bother you.

In short, English mastiffs look scary, which might be enough to prevent problems, but they’re not going to attack as a guard dog. They make for a fantastic alarm to keep you aware of everything that’s out of order or dangerous, but you shouldn’t expect them to jump to your defense. It might happen rarely, but it’s not in their nature....that's why they should be thought of more as a "watch dog" rather than a "guard dog"

Do English Mastiffs Drool A Lot?

Part of owning an English mastiff is dealing with their drool. Yes! They drool all over the place. You can do all that you want, but it’s nearly impossible to stop them from drooling on furniture, the floor, clothes, and more. Try to think of it as a stamp of love and happiness, because they drool more when they’re excited.

The only way that you can tone down an English mastiff’s drooling is by making sure they drink enough water. Their mouths start to produce more saliva when they’re thirsty or hungry, so giving them enough food and water is essential for slowing the drool. That being said, it’s a constant battle.

While they’re excellent family dogs, you might have a hard time with an English mastiff if you prefer everything to be neat, clean, and tidy. They’re rough, playful, and they drool more than you could imagine. After you experience their joyfulness, drool will become a thing of the past in terms of what really matters.

If worse comes to worst, you can keep your dog outside. As long as they have enough room to run around and get out their energy, you won’t have to deal with the excessive amounts of drool as often as you would if they lived inside. There’s no taming the drool, but you can learn to cope with it.

This page on our site ranks the biggest droolers in the Mastiff line. Just where does the English mastiff rank? Click Here to find out!

Do English Mastiffs Shed A Lot?

Along with drooling, English mastiffs do a whole lot of shedding. Even if they have short hair, it’s thick enough to cause excessive shedding throughout the week. They’re bred to withstand cold temperatures, which is why their coat is thicker than most other dogs.

You can maintain the shedding from your English mastiff by trying out the following suggestions:

Harnesses are a much safer way to control your Mastiff and protect their necks than a leash. Find harnesses on Amazon by clicking here now.

English mastiffs come from a working class of dogs. They’re used to getting up early and pushing themselves through the day. However, due to their large size, it’s important that you don’t force them to experience too much muscle strain. There joints and bones can be damaged if they’re exercising too often.

If you’re trying to figure out the perfect exercise set for your English mastiff, try one or two of these five workouts every day:

Here's a great article of ours which goes much more in depth as to their exercise needs and even gives a few ideas for some creative fun.

Are English Mastiffs Expensive To Maintain?

There’s no question that different dog breeds cost more expensive than others. The truth is that English mastiffs require the same amount of toys as almost any other dog, but they need much more food. Their portions are often three to four times bigger than small dogs, making them more expensive to maintain.

Another area that might raise concerns is that they tear through their toys quickly due to their strong jaws and teeth. They need just as many toys as mentioned above, but they’re going to need replacements more often. A chihuahua wouldn’t rip through a rubber ball nearly as fast as an English mastiff.

They also require more water, but that’s not always a big issue. It’s not nearly as big of an expense as food and chew toys. Roughly, English mastiffs cost about $1,500 per year as adults and $2,000 per year to maintain when they’re puppies. They need more food when they’re growing, so the price is slightly higher in their younger years.

Wondering how much does it cost per year to feed a Mastiff? Learn here...

Are English Mastiffs Easy To Train?

Since they’re used to being part of the workforce, it’s fairly easy to train an English mastiff. They’re very receptive to new tricks and figuring out how you want things to be done. If you’re firm and repetitive with your commands, they’ll do their best to obey.

Before you start the training process, you should keep these three things in mind:

English mastiffs can learn just about every trick in the book. Once you’ve got a specific trick down, you can start teaching them the next one. Their excellent memory allows them to retain previous tricks without overlapping commands.

English mastiffs are some of the best family dogs if you want a pet who will be interactive, loving, and easy to train. Their high maintenance costs and clumsy strength might be a bit of a deterrent, but just know that they’re doing their best to be a part of the group. Once they understand how everything works at their new home, they’ll fit right in.

Here’s a brief summary of what we've gone over in this post:

For More On English Mastiffs Visit These Pages...

I’m Ken Alden. This website is a labor of love from years of research and personal experiences with Mastiffs. I do hope you’ll join me as I share what I’ve learned and continue to learn about this amazing breed.
More About Me